Canzona was conceived and organized by Cricket Handler and Jill Anderson in the summer of 2009. In the fall of that year, we recruited a group of 22 female choral singers known to us in the community, and began some preliminary rehearsals. We also arranged to operate initially under the umbrella of Arts Enable, a 501(c)(3) non-profit California corporation.
​In 2010, Canzona gave its first series of concerts, our Premiere Concert in February, and Welcome Spring! in May. (For programs of past concerts, please see Look & Listen.) In keeping with our mission of mentoring younger female choral singers, our February concert featured girls from the Central Coast Children’s Choir, and our May concert featured a soloist from Cuesta College.

In the fall of 2010, Canzona began its current format of presenting a regular season of two concerts, one in the fall and one in the spring. Our November, 2010 concert was entitled Autumn Harmonies, and our March, 2011 concert was entitled Salute to Spring! Again in keeping with our practice of mentoring, the November concert featured young ladies from the San Luis Obispo High School Concert Choir. 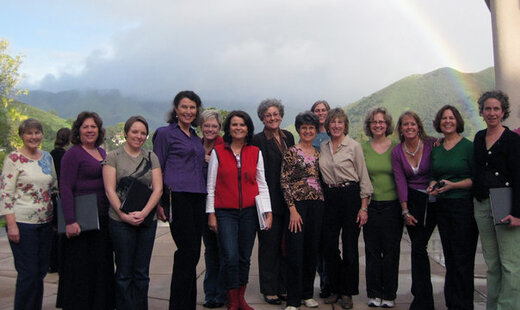 Our 2011-12 season comprised a November concert entitled Autumn Landscapes, and a March concert entitled A Celebration of Love in which we featured the women from the Cuesta College Choirs. Also in 2011, Canzona received its own 501(c)(3) designation, and was therefore able to operate under its own non-profit status. Since gaining this status, we have been able to apply for, and receive, grants from the City of San Luis Obispo and from the San Luis Obispo County Community Foundation!

Our 2012-13 season, featured a November concert entitled Weaving Women’s Voices (a collaboration with the ensemble Soli Deo Gloria from Fresno) and a March concert entitled Celtic & Beyond, highlighting music from the British Isles (Ireland, Scotland & England).

During our 2013-14 season, Canzona presented our first commissioned piece, To the God of Light and Shadow, at our fall concert Light and Shadow. In March we had the pleasure of singing in the Springtime in Paris concert which featured accordionist Duane Inglish from Café Musique.

In the fall of 2015, Canzona was pleased to offer A Tapestry of Song which featured music with an international flair, highlighting our 2015 spring trip to Vancouver, Canada to participate in the Tapestry International Celebration of Women’s Choral Music. The Central Coast Children’s Choir Concert Choir added their voices to our concert, led by director Melody Svennungsen. Our spring 2016 concert was titled Beginning Again, with guest artist violist Peter Jandula-Hudson providing additional depth to the music.

Canzona’s 2016-2017 season was filled with Shakespearean delights and songs about the stages of life. In November 2016, we presented Sing a Song of Shakespeare for our supporters featuring the fine talents of Susan Azeret-Davies on piano. In March 2017 we offered Life is a Song. Sing It! which featured the young women of San Luis Obispo High Concert Choir, directed by Canzona member Colleen Chester. We also produced our first fundraiser, Café Canzona, with seven fine Canzona singers, at the home of supporters Carol and Warren Sinsheimer.
​
In addition to highlighting our local school performing arts organizations, Canzona has made an effort to include a solo instrumentalist in nearly every concert. Thus far, we have featured a violinist, a violist, a harpist, a French horn player, several flutists, an oboist, a clarinetist, an additional pianist, and a cellist on our programs.

We are excited about our future, and look forward to seeing our organization grow!
Proudly powered by Weebly
Photo used under Creative Commons from We Love Crete